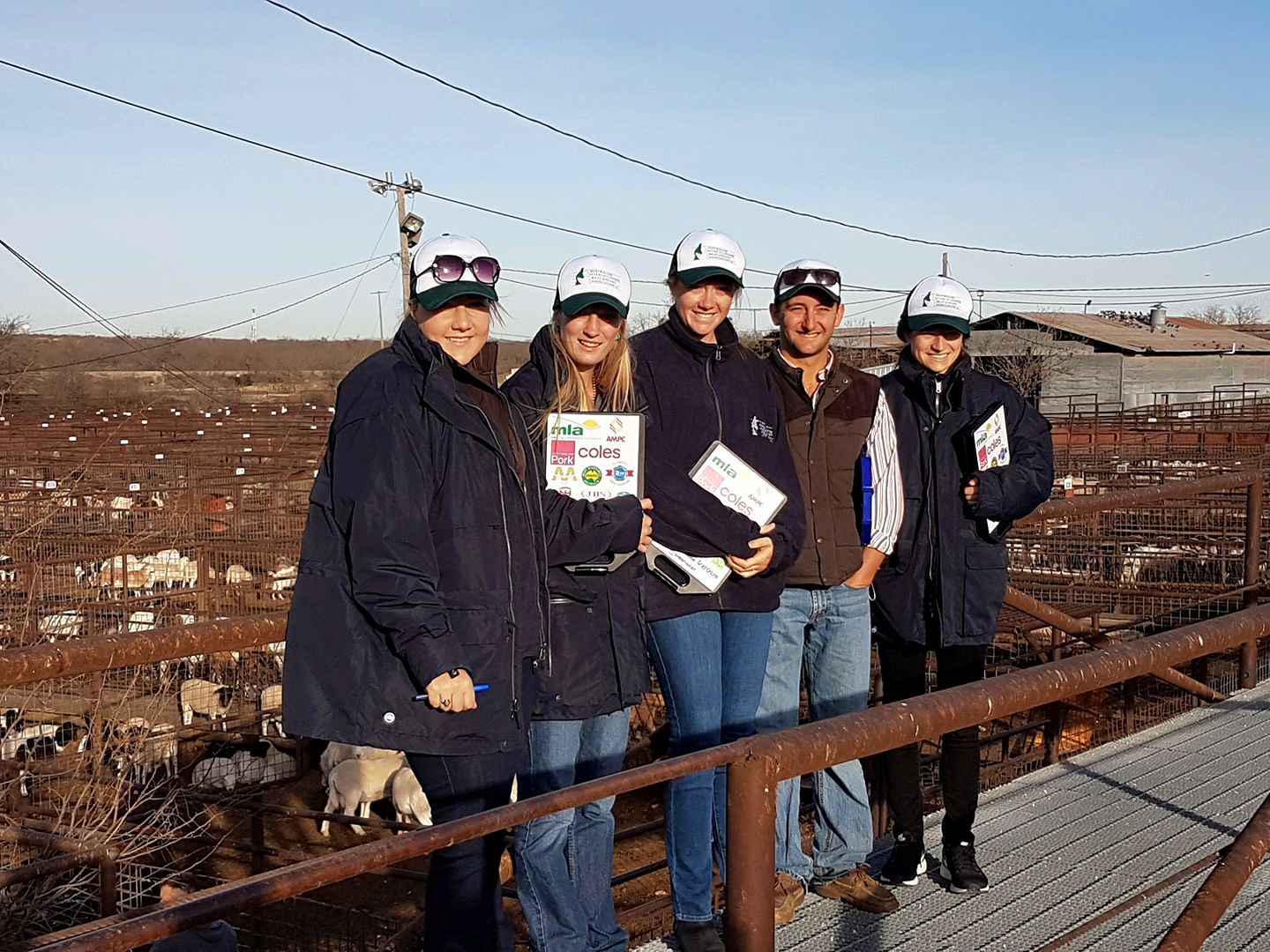 Posted at 21:18h in Uncategorised by icmjadmin

US Trip report by Olivia Swan

Intensive animal production is under constant scrutiny here in Australia due to perceived management practices, with the US relying heavily on these industries to feed its population. How can food production be maintained as the world population continues to expand, with the global consumer having an increased desire for protein while also wanting to have greater say in how their food is produced.

The world population is projected to reach almost 10 billion in 2050 thus demanding a 50% increase in food production (Food and Agriculture Organization of the United Nations (FAO) 2017). The global market for red meat is growing, especially in developing countries, as it is a desirable source of high quality protein (FAO 2017). Certain demographics of consumers are demanding that their food is produced in an ethical manner, with some willing to pay a premium for this (Peck 2009). Australia and the United States of America (USA) currently hold high standards in the welfare of food producing animals. It is critical that the Australian meat industry actively and positively engage with its consumers to educate them on the strict policies and procedures in place that maintain animal welfare. Beyond consumer education, there is scope for improvement in the current system.

Two areas that have scope for improvement are (i) saleyards and (ii) antibiotic use. While currently playing a valuable role in the marketing channel of livestock, the use of saleyards as a means of selling cattle is a potential risk to the biosecurity of the national herd and places on animals. In order to supply the growing demand for meat products, the industry is posed with the challenge of increasing efficiency in a manner that does not compromise animal welfare. Antibiotic usage is another are that holds potential risk. The potential for antibiotic resistance poses a threat for animal welfare and production efficiency thus its use should be more tightly regulated and alternatives explored (Cottle & Kahn 2014 p. 77). Although supplying the increased demand for red meat will provide challenges for the meat industry, advancement in technologies and management practices should enable an increase in production in an ethical manner.

Saleyards provide a way of stock to be sold and the cattle sent there may be purchased by feedlots, with this being a very popular method in the USA as well as Australia. This method compromises the welfare of cattle through creating stress as the animals must be transported to and from the saleyard (Håkansson et al. 2016, p. 256). Furthermore, in a saleyard environment the stocking density is high which has the potential to increase stress and facilitate spread of disease between animals (Cottle & Kahn 2014, p. 254). In order to maximize efficiency and welfare of the animal, the use of this high risk method of selling stock should be minimized. Although saleyards are traditional and seemingly convenient, their use should be reviewed especially as rapid advancements in technology have resulted in the launch of online platforms such as (http://auctionsplus.com.au) as a method for cattle marketing and purchase. However, according to the Australian Bureau of Agricultural and Resource Economics and Sciences (ABARES) farm survey in the 2014-15 year majority of cattle was sold via saleyard auction, with less than 1.8% sold through AuctionPlus. The industry needs to look towards innovations such as online auction platforms which supersedes the need for traditional saleyards and thus allow improvement in the efficiency of the industry by reducing stress and the risk of disease transmission.

Intensive animal production systems are high risk in terms of disease transmission due to high stocking densities, co-mingling of animals and immune suppression resulting from stress (Cottle & Kahn 2014, p.254). Therefore, these systems are reliant on antibiotics for effective disease treatment and prophylaxis (Cottle & Kahn 2014, p. 255). Multiple studies have identified a decrease in susceptibility of pathogens causing bovine respiratory disease to antibiotic therapy (DeDonder & Apley 2015 p. 125). If bacteria become resistant to antibiotics, the health and welfare of the infected animal will become compromised due to the consequent disease that results from infection (Bengtsson & Greko 2014, p. 96). In order to address the problem, on the first of January 2017, the Food and Drug Administration (FDA) in the USA updated the Veterinary Feed Directive resulting in the requirement for veterinary involvement in the prescription of antibiotics that are important to human medicine (FDA 2017). Tyson Foods are also addressing the challenge of antibiotic resistance by investing in research for alternatives to antibiotics for disease prevention and treatment (Tyson Foods 2017). In order to maintain efficiency as global food requirements increase, it will become even more critical to prevent disease and efficiently treat any outbreaks.

It is well documented that animals subjected to stress throughout their life will produce carcasses that are of poorer quality and/or yield (Llonch et al. 2016). Therefore, it is within the economic interest of producers and processors to maximize animal welfare in order to minimize stress experienced by the animal. Unfortunately, urbanization has led to a disconnection between the agricultural industry and urban communities (Hocquette et al. 2014 p. 1538). In mainstream society there is a general lack of understanding of livestock management practices that occur, as well as the motives behind them. This has resulted in some members of the public viewing certain practices negatively (Animals Australia 2017). In order to gain the trust of the consumer, the Australian meat industry must become more transparent, while proactively  engaging with and educating consumers whom want to learn about how their meat is produced.

Currently the public does not have easily accessible and reliable sources of information about where their meat comes from as evident by the lack of public knowledge (Worsley 2015 p. 400). An Australian example of this is the practice of mulesing in sheep, which was emotively ‘exposed’ by animal rights group PETA in 2004 (Owens 2013). This caused a serious backlash by the public, and the Australian sheep industry then had a difficult job of trying to justify the reasoning behind this practice. This exposition of the sheep industry resulted in an accelerated attempt to eradicate the need to mules as a flystrike prevention method, which included shifts in the genetics of the Australian sheep industry from merino towards plain-bodied sheep (Australian Wool Grower’s Association 2013). The red meat industry needs to be proactive instead of reactive when it comes to consumer education in order to prevent consumer dissatisfaction. The need for community engagement when setting welfare standards has been identified in the Australian Meat Industry Strategic Plan for 2020, in which lack of community support was identified as the single biggest risk to the industry at a potential cost of $3.90 billion (RMAC 2017  p. 5)  By empowering the consumer through appropriate education of the Australian meat industry the consumer can trust that their meat is ethically produced. Furthermore, this education will ensure that all aspects of production are held to the standards of the public, and thus provide opportunities for the meat industry to improve welfare practices in order to meet the standards of the public. For example, sheep producers must now document mulesing status on a National Wool Declaration (NWD), with certified wool programs paying a premium for non-mulesed or applied pain relief product (AWEX 2014 p. 7). Therefore, public knowledge will improve the welfare of food animals consumer confidence in the product.

Ethically producing sufficient red meat to provide the growing global population with a safe and nutritious protein source presents challenges for the Australian industry. In order to supply the demand for red meat, the industry must become as efficient as possible. An effective way to do this is by reducing stress experienced by animals by limiting the use of saleyards. Furthermore, responsible use of antibiotics to minimize pathogen resistance and research into novel antimicrobials will prevent loss of productivity due to stock becoming diseased. It is important that the public has easily accessible, factual information on how red meat is produced in order for the red meat industry to gain the trust of the consumer. This relationship also has the potential to improve animal welfare standards, for example the fast-tracking of phasing out mulesing in sheep. Although ethically meeting the increasing demand for quality red meat poses challenges for the industry, removal of inefficiencies and concurrent improvement of management practices through the utilization of new technologies will enable growth in red meat production.

Food and Agriculture Organization of the United Nations (FAO) 2017, The future of food and agriculture: Trends and challenges FAO, viewed 26 February 2017, http://www.fao.org/3/a-i6583e.pdf