How does the US sheep and lamb industry stack up against Down Under? 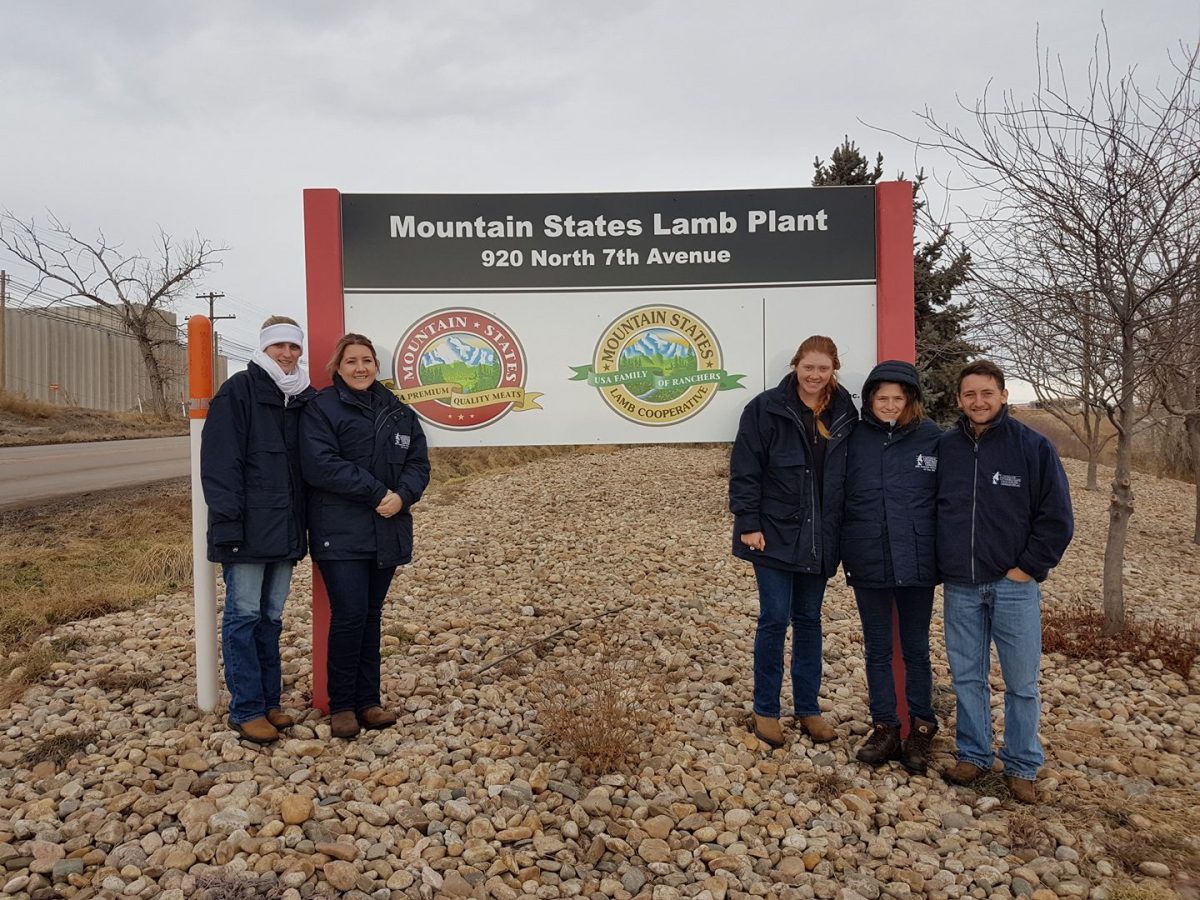 15 May How does the US sheep and lamb industry stack up against Down Under?

Posted at 00:18h in Uncategorised by icmjadmin

US  Trip Report by Gabi Ryan

Australia is one of the leading sheep and lamb producers in the world. During a recent tour of the United States, I was able to observe how the sheep and lamb industry compared to back home in Australia. The following report explores differences between the two industries, sheep meat quality and retail availability.

One similarity between the US and Australian lamb industries is the distribution of production being concentrated within particular areas. Figures from the 2012 US Census of Agriculture highlighted 34% of total sheep and lamb production, in terms of animal sales, occurred in three states – Colorado, California and Texas (NASS, 2015). Despite significantly fewer animal sales, Wyoming, Utah and Montana are the top wool producing states in the US indicating the spread of meat and wool breeds across the nation (NASS, 2015). Similarly, in Australia most sheep are found in three regions, south-western Western Australia and Victoria, as well as southern New South Wales (MLA, 2016a). The majority of Australian prime lamb producers are concentrated within the sheep-wheat zone of the Riverina (NSW), the Murray region (NSW and Victoria) and eastern South Australia (MLA, 2016a). While wool producers are found in the sheep-wheat zone of Australia, South Australia and Western Australia.

Despite this similarity, there are prominent differences between how sheep and lambs are produced in the two countries. US sheep farms are generally open range or farm flock operations. The former is categorised by vast rangelands of native pastures upon which larger flocks are run (>50 head). In comparison, farm flock operations focus on improved pastures and host smaller flocks, consisting of less than 50 head (NRC, 2008). Additionally, AgCensus figures from 2012 demonstrated that 75% of sheep and goat farms operated on less than 49 acres in the US (NASS, 2015). These two forms of production systems are namely responsible for raising sheep and many lambs, which are then sold onto feedlots for finishing prior to slaughter. It has been estimated that up to 90% of US lambs are finished in feedlots, namely because of higher feed efficiency of grain based diets and abundant cheap grain available within the US (Male, 2012). Colorado alone has 6 feedlots with a total capacity exceeding 290,000 head at any one time (AgMRC, 2005). In comparison, in Australia there are significantly more lambs produced on pasture or pasture and grain mixed rations. Properties on which sheep are produced are spread over highly diverse landscapes, ranging from high to low rainfall areas and temperate to tropical climates (ABS, 2015). Traditionally, the typical Australian flock consisted of self-replacing merinos, however recent times have seen a heavy terminal sire influence such as Border Leicesters, Suffolks and Dorpers (Warn et al., 2006). The shift towards meat breeds comes off the back of poor wool prices and relatively high sheepmeat prices. This trend has also been observed within the US industry, with a decline in wool breeds, such as Rambouillet, and an increase in meat breeds, such as Texels and Katahdins (ASIS, 2014b). There is also a heavy focus on showing sheep within the US industry, resulting in many animals produced purely for showing and winning ribbons as opposed to breeding in commercial production systems. 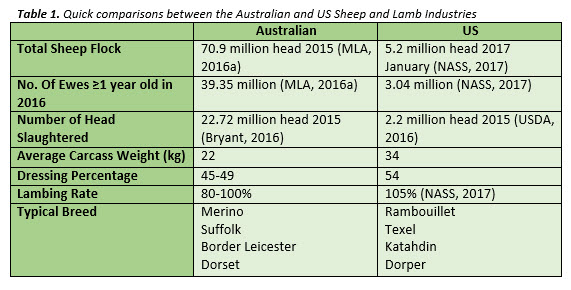 Who’s heavier? And what does this mean?

A stark difference between the US and Australian lamb industry is carcase size. US lambs are significantly larger at slaughter, typically weighing 34kg dressed (ASIS, 2014a). In comparison, Australian lamb carcase weights average 22kg dressed. On average, US lambs dress out at 54%, compared the 45-49% in Australia (AWI, 2008). It is important to note the US industry has found that the increase in carcase weights has resulted in a higher number of yield grades 4 and 5 rather than the optimal grades 2 and 3 (ASIS, 2014c). A yield grade (1 to 5) is assigned to each US lamb to essentially quantify the lean to fat ratio of each carcase, as depicted below in Figure 1. A yield grade 1 is a high yielding carcase with little fat coverage, while a yield grade 5 typically has a significant amount of excess fat, ultimately represents wastage and therefore a lower yielding carcase . Yield grades 2 and 3 represent the most desirable carcases as they optimise the lean to fat ratio, minimising wastage (fat) and maximise muscle. It is also worthy to mention that the inevitable increase in age with heavier carcases results in fewer animals available for graded lamb programs, consequently incurring price deductions. The heavier carcase weights in the US can be attributed to the longer time on feed (grain based ration) and higher growth rates, compared to the typical 6-12 month turn off in Australia. 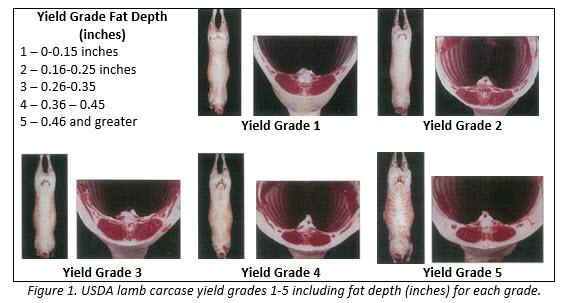 A consequence of longer time on feed in the US is a greater degree of fat deposition, particularly for meat breeds (Wood et al., 2008). It has been found that lambs consuming high grain diets produce high levels of propionic acid, which results in soft, waxy subcutaneous fat that could influence consumer preference (Wood et al., 2008). Intramuscular fat deposition also increases with prolonged time on feed, resulting in a higher degree of marbling which is closely linked with meat juiciness and flavor. It was evident during time spent in carcase chillers during the US tour that the degree of flank streaking and marbling was superior to that displayed in Australia, both of which are great indicators of quality. However, it has been suggested in literature that the elevated eating quality as a result of intramuscular fat has an inverse relationship with nutritional value of the product (Wood et al., 2008). In saying this, lambs that have grazed pasture have been found to have “healthier” meat than those consuming a high grain diet, as their meat has higher levels of polyunsaturated fats and conjugated linoleic acids (Wang et al., 2015). Such products have been linked to positive human health outcomes, including protective benefits against some disease such as multiple sclerosis or autoimmune diseases (Wang et al., 2015). Since Australian lamb production is heavily pasture based, it could be argued that the typical nutritional composition of Australian lamb meat differs slightly from US lamb, which incorporates a higher degree of grain feeding. This grain based diet in the US could render their production system superior in terms of individual productivity, accounting for their larger carcases. Despite larger these carcase sizes, US lambs yield less than Australian lambs, likely a consequence of longer time on feed resulting in a higher dregree of fat deposition.

The US Consumer’s Hunger for Lamb

The amount of lamb meat available in the US market is significantly less than other proteins; chicken, pork and beef (NRC, 2008), namely as a function of price and preference. As demonstrated below in Table 2, figures from 2015 suggest that US citizens consumed, per capita: 24.7kg of beef and veal, 22.7kg of pork, 47.6kg of poultry and 0.4kg of lamb/sheep meat (OECD, 2016). Comparisons between the two countries and the world meat consumption values can be found below in Table 2. To put US lamb consumption into perspective, it was estimated that Australians consumed 7.4kg/capita in 2015, compared to the 0.4kg/capita in the US (OECD, 2016). It is also noteworthy to mention that this figure would be closer to zero for most US citizens and significantly higher for others, particularly those from Ethnic or Hispanic backgrounds. Of the lamb that is available at retail level in the US, 65% of this is imported (MLA, 2016b). Of that imported lamb, 65% originates from Australia and 35% from New Zealand (AgMRC, 2012).

Packaging and selling lamb in the US varies according to how it is graded or if it is graded at all. If lamb sheepmeat carcases are inspected by a USDA grader (which is not a requirement), it will receive a USDA grade ranging from prime to cull. Lamb graded as prime, choice or good is eligible to be marketed as lamb at retail, while lower grades are reserved for ground meats or used in further processed products (USDA, 2011). Since it is not a requirement for lamb to be graded in the US, the quality of ungraded lamb products cannot be guaranteed (USDA, 2011). Despite clear labelling on graded lamb products and USDA educational strategies, US consumers are relatively uninformed regarding sheepmeat products. The typical US consumer has a relatively limited understanding of how to cook lamb correctly therefore are reluctant to purchase the product. Industry is beginning to realise this and is focusing on value added products to improve the customer experience. In saying this, they are also focused on providing products with consistency, versatility and convenience that meet the needs of US consumers and match what they are willing to pay for the product (ASIS, 2014c). Since lamb production is relatively low in the US, the price of lamb is higher than that of chicken, pork and beef and the limited understanding of how to cook lamb poses real challenges for those wanting to see lamb production increase in the US.

It is evident that there are significant differences between the US and Australian sheep and lamb industries. Australia dominates the US with respect to the scale of production, lamb consumption and value of the industry. The US trumps Australia in terms of carcase size and feedlotting capacity. Despite these differences, both industries have the opportunity to learn from one and other in order to improve the general quality, consistency and consumer preference for lamb, ultimately ensuring the long term sustainability and popularity of lamb production worldwide.