The difference between Australian and Japanese carcase assessment

03 May The difference between Australian and Japanese carcase assessment

Posted at 04:03h in Uncategorised by icmjadmin

The carcases are assessed at the assessment site, the m.longissimus dorsi once the carcase has reached its ultimate pH. Carcases may be ribbed at any site between the 5th and 13th rib except for Veal carcases which may be assessed at any site between the 4th and 13th rib. Subcutaneous Rib Fat, Total Rib Fat and Eye Muscle area measurements may only be conducted between the 10th and 13th rib. The assessment site must be below the assessor’s eye level with the torch held at an angle between 35 and 50 degrees and the assessor standing parallel to the sawn chine. Assessment must not commence until 20 minutes after ribbing to allow the meat surface to effectively bloom. Refacing is required where the post ribbing time has exceeded 3 hours, progressed past the bloom stage or if there is evidence of assessment site damage.

The Japanese grading system is underpinned by the Beef Carcase Trading Standards developed by the Japan Meat Grading Association (JMGA). Assessment is conducted by JMGA qualified graders who undertake a very thorough training process. Applicable conditions of beef carcase trading standard include chilled carcases, carcase to be quartered between the 6th and 7th ribs and the classification of defects. A yield grade is determined with three different categories – A (72 or more), B (69 – 71) and C (less than 69). This is determined by measuring the eye muscle area, thickness of “roses” and subcutaneous fat. A “fleshy grade” is determined through scores for marbling, meat colour, fat colour and tightness and texture of meat. The grade ranges from one to five with five most desirable. The yield category and fleshy grade are both displayed on the carcase. This grading system tends to be more subjective and not as heavily regulated.

Marbling is the intramuscular fat visible which appears as fine flecks of fat within the muscle. Marbling is deposited unevenly throughout the carcase, increasing towards the head and decreasing towards the tail, affected by genetics, breed and nutrition. Eating quality is positively affected by marbling in the terms of tenderness, juiciness and flavour. Marbling assessment is influenced by stress and stock management and chilling. Intramuscular fat is partially liquid and becomes solid at low temperatures. Therefore, the longer the carcase is chilled for the more fat will solidify and the paler it will appear.

This slightly differs in Japan; the assessment of marbling is based in reference standards ranging from 1 to 12 with one very little marbling through to 12 – very high amounts (figure 3). 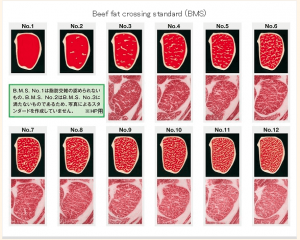 The marble scores are then grouped into a Beef Marbling Standard (B.M.S) number ranging from 1 (lowest) to 5 (highest) depending on the abundance of marbling. B.M.S score 5 is comprised of the high marble scores of 8 to 12. These high scores are difficult to distinguish with a high accuracy with the human eye. Professor Kuchida, Obihiro University has spent many years of research in developing a mean to objectively evaluate marbling which will improve the accuracy of grading. The camera technology used acquires an image up to 4 times the resolution of the human eye however is yet to be used on a commercial basis.

In Australia meat colour has a major influence on consumer preference. A bright cherry red colour is sort after by the everyday consumer. Dark cutting meat is rejected by at retail level due to its dark colour and reduced shelf life. Meat colour is correlated with pH and glycogen levels and is affected pre- slaughter – stress, mixing, poor handling and post slaughter – electrical stimulation.

AUS-MEAT Chiller Assessment Standard states meat colour can be assessed at any rib site between 5th and 13th rib and scored against the AUS-MEAT Meat Colour Reference Standards in the area of the m.longissimus dorsi that displays the most predominant colour. The AUS- MEAT Reference standard ranges from 1A – 7 with 9 potential scores.

The Japanese’s system is very similar with 7 scores ranging from 1 – 7. This system is slightly broader compared to the AUS-MEAT system and doesn’t allow for meat colours great then a score 7.

Fat colour of a carcase is influenced by breed, age, nutrition as well as chilling time and temperature post-mortem. The yellow colour is due to the deposition of the pigment carotene in the fat, the greater the concentration the more intensive yellow colouring. Green pasture is rich in carotene with the ingested pigment stored in the fat resulting a yellow colour. In contrast, most grains contain little carotene resulting in a white to creamy fat in the carcase. Fat colour has no effect on eating quality however influences the saleability due to appearance.

AUS-MEAT fat colour standards range from 0 – 9. A white bright fat is assessed as 0 through to a rich creamy yellow colour a 9.

The Japanese grading system covers fat colour with standards from 1 – 7. Very similar but not as distinguished at the Australian system.

Carcase assessment is a valuable tool used in Australia and Japan meat industry to describe a product for trade. The systems are similar however are slightly different. Both countries measure meat colour, fat colour and marbling characteristics.  Australia incorporates other characterises such maturity to a determine a grade where the Japanese’s system is more focused on a “Fleshy” score including tightness and texture of meat.