Posted at 22:54h in Uncategorised by icmjadmin

From her home office about two hours outside of Sydney, Kiri Broad is overseeing a project that is changing the way red meat supply chains operate.

She works for one of Australia’s largest retailers, optimising data systems to improve traceability in proteins.

Working alongside data experts and IT analysts, Kiri gives her team a valuable perspective and first-hand knowledge about the practical realities of the supply chain.

In support of NFF’s National Agriculture Day tomorrow (19/11/2021), ICMJ is challenging Australians to consider a career in agriculture by sharing stories of the ICMJ team’s own ‘AgVentures’.

Kiri Broad is the national treasurer of ICMJ.

Kiri’s ‘AgVenture’ began in a small dairy town in regional New South Wales where she was offered a casual job milking cows on the weekend after a local dairy farmer heard she was studying agriculture at high school.

“It was way better than serving in a café – that was the other main option in my hometown,” she said.

After a lightbulb moment with a high school career advisor, Kiri applied to study animal science.

“I thought I might like to study marine biology but the career advisor suggested animal science – I didn’t event know that was a course,” she said.

Kiri later lived on a research station in far north Queensland, took up various livestock advisor roles in outback Queensland and went on to work for Australia’s second largest meat processor before landing her current role in project management with Woolworths.

Kiri says her early experiences in agriculture opened her eyes to the huge variety of careers available.

She now works with ICMJ to encourage other young professionals and students to pursue a career in the red meat industry.

“A lot of people think working in agriculture means being on a farm or a farming consultant or that you have to live in a rural area, but that’s not the case,” she said.

“There are so many different jobs in agriculture and they can be in the city or wherever you want to be.”

ICMJ inspires and supports young people who want to build a career in the red meat industry by developing their skills and knowledge and connecting them with industry leaders.

Through various programs and events including ICMJ’s Northern Conference in Rockhampton and its National Conference in Wagga Wagga, ICMJ participants broaden their industry knowledge and increase their potential to become future leaders in the field.

The ICMJ Virtual Careers Fair is also a fantastic initiative that helps young people forge their own AgVenture path.

Kiri says the most important piece of advice for young people embarking on a career in agriculture is to say ‘yes’ to opportunities.

“Don’t be afraid to jump straight out of uni and go and work somewhere like the Northern Territory,” she said.

“Those early-career experiences are invaluable and will take you places you might not expect.” 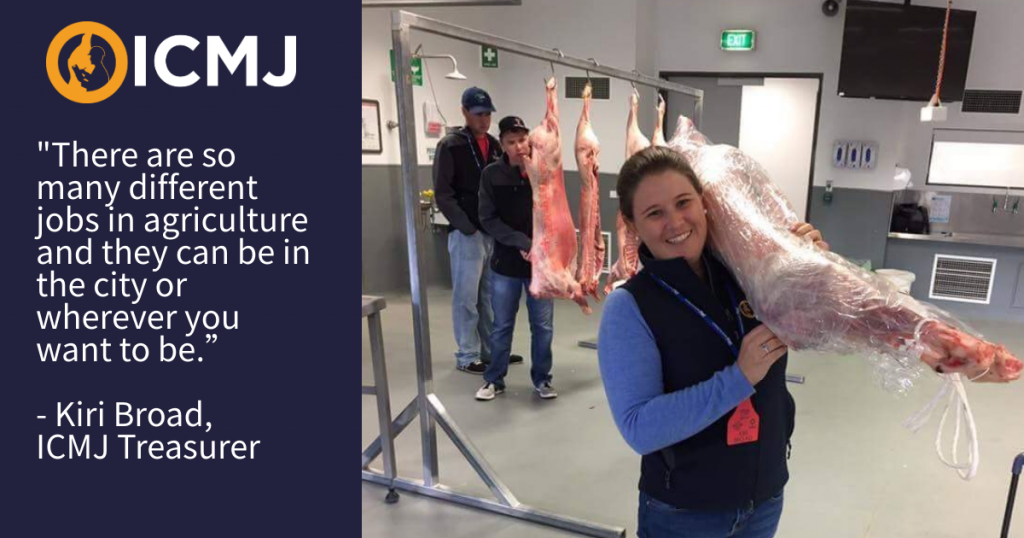